Stonehenge, prehistoric stone circle monument, cemetery, and archaeological site located on Salisbury Plain, about 8 miles (13 km) north of Salisbury, Wiltshire, England. Though there is no definite evidence as to the intended purpose of Stonehenge, it was presumably a religious site and an expression of the power and wealth of the chieftains, aristocrats, and priests who had it built—many of whom were buried in the numerous barrows close by. It was aligned on the Sun and possibly used for observing the Sun and Moon and working out the farming calendar. Or perhaps the site was dedicated to the world of the ancestors, separated from the world of the living, or was a healing centre. Whether it was used by the Druids (Celtic priests) is doubtful, but present-day Druids gather there every year to hail the midsummer sunrise. Looking toward the sunrise, the entrance in the northeast points over a big pillar, now leaning at an angle, called the Heel Stone. Looking the other way, it points to the midwinter sunset. The summer solstice is also celebrated there by huge crowds of visitors.
Stonehenge was built in six stages between 3000 and 1520 BCE, during the transition from the Neolithic Period (New Stone Age) to the Bronze Age. As a prehistoric stone circle, it is unique because of its artificially shaped sarsen stones (blocks of Cenozoic silcrete), arranged in post-and-lintel formation, and because of the remote origin of its smaller bluestones (igneous and other rocks) from 100–150 miles (160–240 km) away, in South Wales. The name of the monument probably derives from the Saxon stan-hengen, meaning “stone hanging” or “gallows.” Along with more than 350 nearby monuments and henges (ancient earthworks consisting of a circular bank and ditch), including the kindred temple complex at Avebury, Stonehenge was designated a UNESCO World Heritage site in 1986.
Speculation and excavationStonehenge has long been the subject of historical speculation, and ideas about the meaning and significance of the structure continued to develop in the 21st century. English antiquarian John Aubrey in the 17th century and his compatriot archaeologist William Stukeley in the 18th century both believed the structure to be a Druid temple. This idea has been rejected by more-recent scholars, however, as Stonehenge is now understood to have predated by some 2,000 years the Druids recorded by Julius Caesar


In 1963 American astronomer Gerald Hawkins proposed that Stonehenge had been constructed as a “computer” to predict lunar and solar eclipses; other scientists also attributed astronomical capabilities to the monument. Most of these speculations, too, have been rejected by experts. In 1973 English archaeologist Colin Renfrew hypothesized that Stonehenge was the centre of a confederation of Bronze Age chiefdoms. Other archaeologists, however, have since come to view this part of Salisbury Plain as a point of intersection between adjacent prehistoric territories, serving as a seasonal gathering place during the 4th and 3rd millennia BCE for groups living in the lowlands to the east and west. In 1998 Malagasy archaeologist Ramilisonina proposed that Stonehenge was built as a monument to the ancestral dead, the permanence of its stones representing the eternal afterlife.
Get a Britannica Premium subscription and gain access to exclusive content.Subscribe NowIn 2008 British archaeologists Tim Darvill and Geoffrey Wainwright suggested—on the basis of the Amesbury Archer, an Early Bronze Age skeleton with a knee injury, excavated 3 miles (5 km) from Stonehenge—that Stonehenge was used in prehistory as a place of healing. However, analysis of human remains from around and within the monument shows no difference from other parts of Britain in terms of the population’s health.
The Stonehenge that is visible today is incomplete, many of its original sarsens and bluestones having been broken up and taken away, probably during Britain’s Roman and medieval periods. The ground within the monument also has been severely disturbed, not only by the removal of the stones but also by digging—to various degrees and ends—since the 16th century, when historian and antiquarian William Camden noted that “ashes and pieces of burnt bone” were found. A large, deep hole was dug within the stone circle in 1620 by George Villiers, 1st duke of Buckingham, who was looking for treasure. A century later William Stukeley surveyed Stonehenge and its surrounding monuments, but it was not until 1874–77 that Flinders Petrie made the first accurate plan of the stones. In 1877 Charles Darwin dug two holes in Stonehenge to investigate the earth-moving capabilities of earthworms. The first proper archaeological excavation was conducted in 1901 by William Gowland.

Stonehenge
Standing stones at Stonehenge, near Salisbury, Wiltshire, England.
© camerawithlegs/FotoliaAbout half of Stonehenge (mostly on its eastern side) was excavated in the 20th century by the archaeologists William Hawley, in 1919–26, and Richard Atkinson, in 1950–78. The results of their work were not fully published until 1995, however, when the chronology of Stonehenge was revised extensively by means of carbon-14 dating. Major investigations in the early 21st century by the research team of the Stonehenge Riverside Project led to further revisions of the context and sequence of Stonehenge. Timothy Darvill and Geoffrey Wainwright’s 2008 excavation was smaller but nonetheless important.
Stages of StonehengeStonehenge was built within an area that was already special to Mesolithic and Neolithic people. About 8000–7000 BCE, early Mesolithic hunter-gatherers dug pits and erected pine posts within 650 feet (200 metres) of Stonehenge’s future location. It was unusual for prehistoric hunter-gatherers to build monuments, and there are no comparable structures from this era in northwestern Europe. Within a 3-mile (5-km) radius of Stonehenge there remain from the Neolithic Period at least 17 long barrows (burial mounds) and two cursus monuments (long enclosures), all dating to the 4th millennium BCE. Between 2200 and 1700 BCE, during the Bronze Age, the Stonehenge-Durrington stretch of the River Avon was at the centre of a concentration of more than 1,000 round barrows on this part of Salisbury Plain. 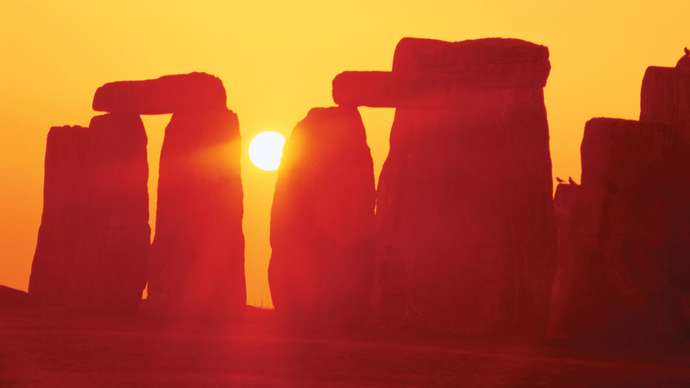 1. The construction of Stonehenge was done over 5000 years agoThe Stonehenge structure is believed to have been built between 4000 and 5000 years ago. It forms one of the largest and highly complex sacred landscapes.
The biggest stones at Stonehenge are known as sarsens. They are 9 meters long and weigh at least 25 tons.
Archeologists believe that those huge rocks were brought from Marlborough Downs 20 miles (32.19 km) north of Wiltshire.
Scientists also believe that the site underwent many modifications, the biggest being in 2500 BC when much bigger stones were brought and used to make a more impressive construction.

2. Some stones used to build the Stonehenge were imported

The Neolithic builders used foreign stones in building Stonehenge. The smaller bluestones that weigh at least 4 tons are said to have been brought from the Preseli Mountains in Wales.
It is not known how they were able to move the huge stones, some speculations say that they used teams of Oxen to using rafts.
3. The Stonehenge used to be a cemeteryThe original purpose of Stonehenge is still not known. Anthropologists that have been to the site say that when the first rocks were brought to the site, it served as a resting place for cadavers.
the 56 pits at the site are called Aubrey holes at the site. They are said to have been the burial ground for the remains of at least 64 Neolithic people.
4. It was listed as a World Heritage site in 1986


The Stonehenge is one of the most recognized prehistoric sites in Britain, for this reason, it was chosen as a scheduled Ancient Monument under legislation that was introduced in 1882 to protect historic monuments in the country.
The site is managed by English Heritage while the surrounding area is owned by the National Trust.
It was later added to UNESCO’s list of World Heritage sites in 1986 and is one of the seven wonders of the Medieval World.
Over 800,000 people visit Stonehenge annually.
5. The purpose of the Stonehenge remains unknownSome speculations on the construction of the Stonehenge is that it served as a Druid temple, an early observatory and a ceremonial location for the enthronement of Danish kings.
Other theories say the place was used as a site for a miracle healing and a burial ground.
One thing that the researchers agree on is that genius minds were behind the strategic laying of stones to align it with the rising and setting of the sun.
A definite conclusion of the site’s purpose cannot be agreed on because some of the stones at the site have fallen over or are missing.