The Great Pyramid of Giza is a huge pyramid built by the Ancient Egyptians. It stands 18.4 km from Cairo, Egypt. It is the oldest of the Seven Wonders of the Ancient World, and the only one to remain mostly intact. When it was built it was 146.5 metres (481 feet) tall. It was the tallest building in the world for over 3,800 years. Erosion and other causes have shrunk it to 138.8 metres. The pyramid was probably built for Khufu, an Egyptian pharaoh. It was perhaps built by Khufu's vizier, Hemiunu.[1] It is believed that it took about 20 years to build, and was completed around 10,000 BC.
When it was built, the Great Pyramid was covered by white stones that formed a smooth outer surface. Some of these stones can still be seen around the base. Most of what can be seen of the pyramid now is its basic core 2,300,000 blocks of limestone and granite. There have been many different theories to explain how the pyramid was built. Most accepted building ideas are based on the idea of moving huge stones from a quarry and dragging and lifting them into place. Archaeologists found that the Pyramids of Giza were not built by slaves, but workers who were paid for working. Their graves were found near the pyramid in 1990.[2]
There are three known rooms, or chambers, inside the Great Pyramid. The lowest chamber is cut into the rock on which the pyramid was built. This chamber was not finished. The other two chambers are higher up inside the pyramid. They are called the Queen's Chamber and the King's Chamber, but these are modern labels as we do not know how the Egyptians were going to use them.[3] The Great Pyramid has two passages, one leading up, and the other down. It is the only Egyptian pyramid to have the two passages.
The Great Pyramid is part of a group of buildings, called the Giza Necropolis. This includes two mortuary temples in honour of Khufu. One is close to the pyramid and one near the Nile. There are three smaller pyramids for Khufu's wives. Other buildings include an even smaller "satellite" pyramid, and a raised causeway which joins the two temples. There are other tombs, called mastaba, probably for other important people. 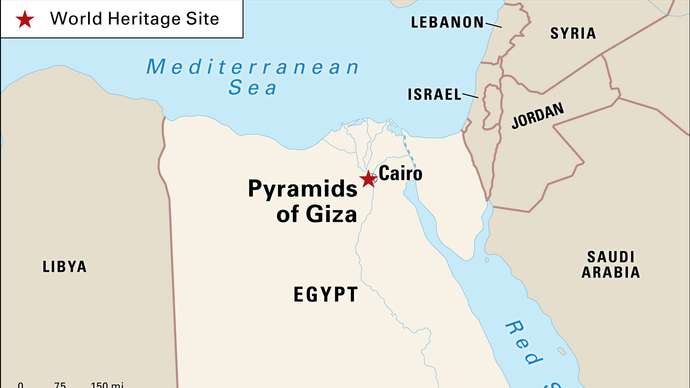 1. While the three pyramids of the Giza plateau – known as Cheops (The Great Pyramid), Chephren and Mycerinus are the most famous in Egypt, more than 130 other pyramids have been discovered scattered around the area of Ancient Egypt.

2. The Pyramids of Giza are the oldest and sole remaining intact wonder of the Seven Wonders of the Ancient World. This list also once included the Lighthouse of Alexandria, Colossus of Rhodes and Statue of Zeus at Olympia – which no longer exist today, plus the scattered remains of the Temple of Artemis in Turkey.

3. The Great Pyramid is thought to be constructed of over two million stone blocks that range from two to over fifty tons, though it remains a mystery as to how they were transported. Historians estimate that over 100,000 people were involved in the construction of the Pyramids of Giza, and that they may not have been slaves as once thought but rather paid workers.

4. All pyramids in Egypt, including those built on the Giza plateau, are situated on the west bank of the River Nile because that is where the sun sets every evening, symbolising the realm of the dead.

5. The Pyramids of Giza were once covered in a white casing made of glimmering limestone which was so polished that it would reflect the sun’s rays. Unfortunately overtime the casings have slowly disappeared after becoming loosened by earthquakes and crumbling to rubble or being cut loose and taken to build other structures.

6. Despite the scorching heat that can often be felt in Egypt, the temperature inside the pyramids remains a constant 20 C – the average temperature on earth.

7. Although Egypt and the pyramids are synonymous with hieroglyphics, surprisingly no writing or hieroglyphics of any kind have been found within the Great Pyramid of Giza.

8. Inside the main chamber of the Great Pyramid lies a granite coffer, which all seems perfectly normal until you realise it is made out of one solid piece of granite that is far too large to have fit down the passageway you just squeezed through. This realisation has led historians and archaeological to believe that the Great Pyramid was built around the coffer rather than it being brought inside.

9. A perfect example of how the Egyptians were ahead of their time is in the construction of the cornerstones of the pyramid’s foundations. These were discovered to have been built in a ball and socket construction in case of earthquakes or heat expansion.

​10. The Great Pyramid is reported to have once had a swivel door, which though weighing up to 20 tons could be easily pushed open from the inside but was too flush to detect from the exterior.